Cameroonian rapper, activist, and human rights defender Gaston Philippe Abe Abe, popularly referred to by his stage name “Valsero,” has been released from jail after nearly nine months of unjust detention. Known for making socio-politically responsive music and inspiring the Cameroonian youth through his songs, Valsero had been in jail since January 26, 2019, when he was arrested on the fringes of a political demonstration. Since then, he had been held without bail awaiting trial for spurious charges that could have carried a punishment as grave as the death penalty. Organizers, fans, and artists around the world called for his release, believing his detention to be a direct attempt to silence a prominent critic of the ruling regime. On October 5, he was finally set free.

Valsero was born in Yaoundé, Cameroon in 1975, and spent his early years in Marseille, France before resettling in Yaoundé with his father in 1987. In 1990, the rapper officially launched his music career, collaborating with musician Bachirou to form the rap group Ultimatum. One of the first groups of its kind at a time when hip-hop and rap were not taken seriously in Cameroon, Ultimatum paved the way for other hip-hop artists in the country. The group produced music for about three years before officially splitting up in 1997. In 2002, Valsero returned to the rap scene, forming a group called K’ROZ’N with two of his childhood friends. After touring with K’ROZ’N, Valsero started searching for new employment opportunities. Despite being well-educated, Valsero struggled to find work, becoming disillusioned with the apparent corrosive effects of Cameroon’s corrupt politics on the workforce.

Valsero’s solo career began in 2008, in the midst of a heated political climate in Cameroon after President Paul Biya dissolved presidential term limits, an action that was met with widespread violent protests. Valsero’s first solo album, Politiquement Instable, established the artist as a leading voice for young Cameroonians who opposed the ruling regime’s authoritarian tactics. Although many TV and radio stations avoided playing the album in fear of retaliation for its political content, the album became so popular that Valsero’s adoring fans started calling him “The General” and “Général Valsero.” The songs on this album, “Çe pays tue les jeunes” (“This Country Kills the Youth”), “Ne me parlez plus de Cameroun” (“Do Not Talk to Me about Cameroon Anymore”), “Lettre au President” (“Letter to the President”) and others depict the struggle of being young and living in Cameroon under the Biya administration and also strive to spread awareness about civil and political rights. His lyrics call for greater accountability and transparency from the government and more democratic processes for the country.

Following the success of Politiquement Instable, Valsero released a single titled “Répond,” in 2009. Shortly after, Valsero released his second full album, Autopsie d’un crime d’état, (Autopsy of a State Crime) in 2010. Just one year later, the artist released his third album, L’appel du peuple (The Call of the People), making that three albums and one single in four years.

But the powerful effect of Valsero’s first album was not only met with admiration; it also drew the government’s ire. He was detained a number of times by Cameroonian police forces and had many concerts banned over the years, but on January 26, Valsero was arrested on the outskirts of a demonstration in protest of the previous year’s presidential election, which many Cameroonians saw as rigged to favor Biya. Biya, who has been in power since 1982, has maintained office through decades of intimidation and force, and his regime has taken countless measures to curtail freedom of expression. According to Freedom House, journalists in the country are at heightened risk of detention because of their work, as defamation remains an indictable offense, and many people refrain from expressing themselves out of fear of reprisal. Periodically, Biya has shut down or severely limited internet access or blocked social media as a way of halting the flow of information and impeding citizens’ ability to mobilize.

At the time of Valsero’s arrest, there were police sweeps across the country that resulted in hundreds of pro-opposition protestors being arrested, and Valsero is thought to have been caught in this sweep. However, though Valsero had endorsed opposition leader Maurice Kamto’s campaign, he was neither a member of the opposition party nor an organizer at the march. He was instead directly targeted because of his numerous songs which denounce the repressive tactics of Paul Biya’s ruling regime and urge social change in Cameroon.

Following his arrest, Valsero was held without bail in terrible conditions for over eight months, awaiting trial in military court on spurious charges of rebellion against the state, terrorism, insurrection, inciting public disorder, and spreading false information. Some of these charges could have carried the death penalty.

Censorship and authoritarian rules in Cameroon have left little room for artistic expression. Valsero, alongside other rap pioneers, has created music with the heavy burden of representing the genre and the younger generation on his shoulders. Valsero’s fans believe his music has given a voice to the marginalized and forgotten youth of Cameroon, capturing the essence of being young under a corrupt political regime during a period of unrest. The artist’s wide array of interests even extends to film: Valsero participated in Jean Pierre Bekolo’s historical drama, “Le President,” released in 2013, and he was the focus of the documentary film “Du Piment sur les lèvres” (“Chili on the Lips”).

Valsero is also an engaged human rights activist who has spearheaded many campaigns over the years in support of democracy, LGBTQ rights, education, and more. In 2007, Valsero launched “Va Voter” (“Go Vote”), to encourage young Cameroonians to vote and become more civically engaged. In 2011, this initiative was transformed into “Je vote donc j’existe” (“I Vote, I Am”). In 2012 and 2013, he led a campaign to raise awareness about sexual health and HIV/AIDS. In collaboration with Jean Louis Moussinga, Valsero also started a campaign to mobilize and sensitize the youth through “Jeune et Fort” (“Young and Strong”), a civil society organization intended to help young, urban individuals recognize their power in African societies, where they often make up the majority. Most recently, Valsero’s association “Our Destiny” works to raise awareness of immigration issues encourage young Cameroonians to engage in their local communities. He is also a member of a network of African citizen movements called “Afrikki,” which includes “Y’en a marre” of Senegal and “Balai Citoyen” of Burkina Faso.

Valsero’s fight for democracy and against authoritarian rule through song and activism made him a direct target for those in control. His arrest reveals the ongoing strength of music and art to unite people and the lengths authoritarian officials will go to suppress dissent, but his release also demonstrates the dedication of his supporters and the power of mobilizing around a common cause in the face of oppression. In a demonstration of solidarity, artists and musicians from around Cameroon created video messages of support for Valsero, and advocacy groups such as Amnesty International created international petitions for his release. On October 5, he was liberated along with about 100 other political prisoners who were arrested in the same sweep (Valsero's sound engineer, however, reportedly remains behind bars). Once again free to make music in peace, his songs will surely continue to inspire around the country and world. 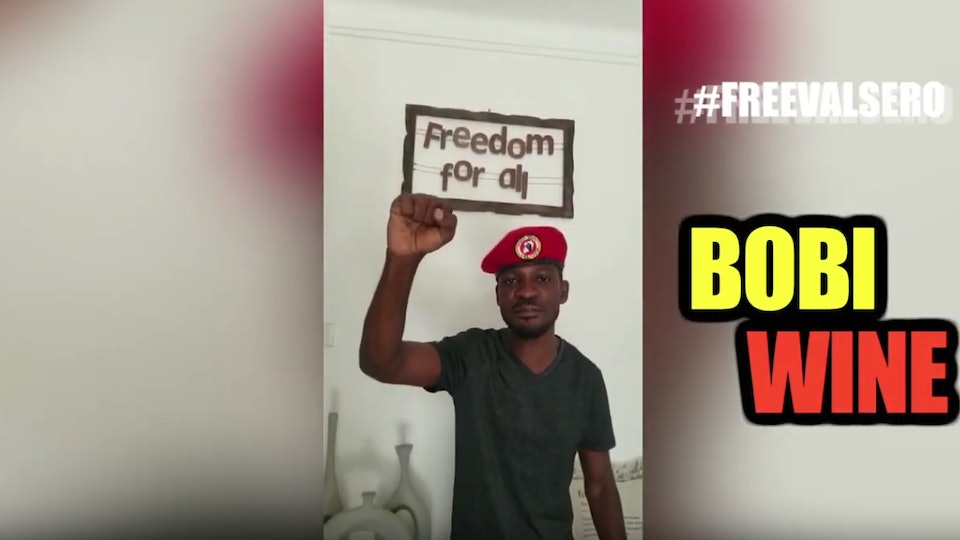 By Anna Schultz, October 2019. Anna is pursuing a B.A. at Sarah Lawrence College, concentrating on politics and history. She hopes to use her academic studies and her passion for art to advance sociopolitical progress and defend human rights.