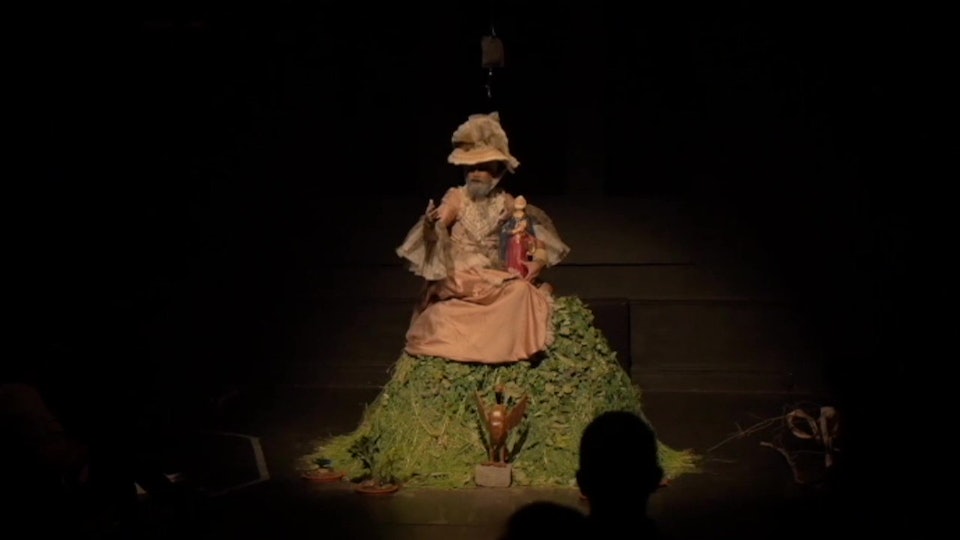 In front of a packed audience at the Bronx Academy of Art and Dance (BAAD!), Nicaraguan queer performance artist Elyla Sinvergüenza debuted their piece “Countering Colonialism: A Queer Ritual of Healing,” which transformed a violent and patriarchal tradition into an immersive experience of healing for the artist and audience members.

Nicaraguan performance artist, researcher, and activist Fredman Barahona, also known as Elyla Sinvergüenza, explores through their work the intersections and complexities of identity, sexuality, body politics, and cultural borders. In particular, they focus on “transvestism, fleeting identities and gender bending expressions in indigenous/mestizo rituals in the Americas.” Currently in an artist residency in Costa Rica, Barahona has long experienced violence both from being queer and an activist, but they find the present situation in Nicaragua to be even harder to respond to, as the number of attacks against activists and protesters continue to rise. Even though the deteriorating conditions in Nicaragua forced them to leave the country for their security, Barahona is pursuing several art projects that delve into the challenges that Nicaraguan students, activists, and the LGBTQ community are facing both in the country and abroad.

Although Barahona uses different media in their work, they are primarily a performance artist relying on photography, video, and installation. Influenced by their education in social anthropology, theater, and contemporary art, they create performance pieces as an ongoing interaction with their audience that includes many layers of interpretation. Their creative approach is based “on attending rituals, visiting site specific locations and questioning the political context utilizing transvestism or travestismo as a weapon for political action aiming for social change. Although not all my performances or artivist projects involve transvestism."

From 2009 to 2013, they were a student of Social Anthropology at Nicaraguan National Autonomous University (UNAN). During that time, they also studied theater at the Justo Rufino Garay Theatre School. In 2011, they began studying contemporary art at Espira Espora, Nicaragua’s only school for contemporary art, a space Barahona points out as particularly influential in their development as a critical artist. In 2018, they returned to finish their career at UNAN but were not able to finish due to the violent response to student protests. Students who were involved in organizing the protests were kicked and all of their credits and records were erased.

Even before they began their studies, Barahona was already creating performance art and street interventions. They described these performances coming from a place of visceral and unfiltered anger and were immediate reactions to the violence and experiences they faced as a queer person. In one instance, they simply put on their too small mother’s high heels and walked in the middle of a busy street. These pieces were “unfiltered and raw” and in some ways “more radical,” according to Barahona, because they had yet to learn how to take care of themselves and plan for their safety. During these early demonstrations and performances, they received many physical threats: people would throw things at them, follow them, even shout at them, etc.

“Becoming witch, divine, animal, shaman, crazy, transvestite, trans, totemic in the visual and real exploration of my own being: I will be the old woman of the volcano, Saint Jerome, Saint Sebastian, an unruly lady; I will be a deer, I will be a body covered in gold fucking another man like those the colonizers found, I will be an agitator disrupting the symbolic security of this culture.”

In 2013, Barahona, along with friends, founded Operación Queer, a collective bringing together academics and artists to explore the intersections of art, research, and activism. This work gave Barahona the chance to further strengthen connections with other activist organizations and laid the groundwork for their work as an activist. After one year of working with Operacion Queer and dedicating all of their time to their solo art practice, Barahona was invited to be the opening performer of the IX Nicaraguan Biennial in 2014, an incredible breakthrough for a young artist. Unfortunately, a mere 4 hours before they were supposed to start their piece “Sólo fantasia…” the coordinator of the Biennial received a call (later to be found that was directly from the First Lady, Rosario Murillo) telling them to stop Barahona from performing, although the official reasons given were related to an issue with the permit. Barahona decided to carry on with the performance in public areas and was thankful that the older generation of contemporary artists in Nicaragua— whom Barahona calls the “vanguard of the contemporary art movement”—supported them, called the press, and brought this abject act of censorship to the national spotlight.

Since that moment, Barahona has produced numerous art projects, some connected to their activist work, some in response to the difficult political climate in Nicaragua, and some seeking to bridge communities in different countries, such as Trans-totem (2015), Devenir Torovenado (2015), Machete Dress (2016), and Wet Letters, which Fredman produced during a residency in Beijing and focuses on the China-Nicaragua Grand Canal Project and bridging the Chinese community with the local Nicaraguans impacted by the construction of the canal. Nowadays, Barahona is working with exiled LGBTQ Nicaraguan activists on organizing advocacy campaigns from abroad. They are also taking advantage of their current residency in Costa Rica to work with two Costa Rican artists, Natalia Porras, a transgender activist, and sex worker, Luis Herra, a scholar on queer studies.

For some of their projects, Barahona spends at least two weeks exploring the space, its neighborhoods, and meeting its residents as part of their creative approach. There, they talk to the local community, asking them questions and using their feedback to inform and enrich the performance. For Devenir Torovenado, Barahona worked with an indigenous community in Monimbó, Nicaragua. The piece was “a sacred ritual for dissident and subversive everyday practices of the queer indigenous community in Monimbó, questioning the ‘right time’ to perform non-heteronormative identities.” After the performance, Barahona organized a workshop to gather people’s opinions, thoughts, and reactions. This forms part of an informe, a report, that they put together. These reports reveal the performance process, its impact, and the intersection between art and activism as a potential tool for social change.

“Most of the activists in Nicaragua...we have felt repression from the police years ago, before this crisis started. That’s not the start for us. For us, the repression for human rights activists started a long time ago.”

Despite the challenging issues they are tackling, Barahona’s work remains firmly grounded in their experiences and a frank, open dialogue about the issues they struggle with most, whether in Nicaragua, Costa Rica, or elsewhere. Their drive to pursue their work despite the threats and harassments is clear . They say, “I am doing this because it affects me. Because it moves me. Because it’s part of who I am.” They encourage young artists to be empathetic and to give themselves permission to go where their feelings tell them to go. For them, there should not be a difference between one’s art and one’s life.

They prove it through their ongoing work, where their home country continues to be both a source of inspiration and of challenge. In their most recent performance “Yo (no) tengo miedo,” Barahona responded directly to a poem written by the First Lady and Vice-President Rosario Murillo where she qualified those dissenting as “small beings [...] with tiny agendas, thoughts and consciousness.” Barahona performed this piece in San Francisco after receiving death threats. They walked to the Nicaraguan consulate with more than 300 ants. As the names of killed activists, students, social leaders and agricultural workers overpowered a recording of Murillo’s poem, Barahona released the ants in the entrance. Small, industrious, resilient, they stand as a symbol for those who, like Barahona, are not done fighting.

By Jessica Sun, December 2018. Jessica is a Macaulay Honors student at Hunter College with a major in Political Science, a certificate in Public Policy, and a double minor in International Relations and Human Rights. She is also heavily involved in the arts and is interested in further exploring the intersection between the arts and global social justice, human rights, and development studies.

Fredman Barahona Website Yo (no) tengo miedo
Thank you. You will receive an email confirmation.
Close