UPDATE on 3/15/19: On March 9, Eddy Munyaneza was featured in an event at the International Film Festival and Forum on Human Rights in Geneva alongside ARC Director Julie Trébault. The festival screened a section of his documentary Lendemains Uncertains (Uncertain Future), and Munyanezas  experience having to flee Burundi as well as the risks taken by artists working in conflict zones.

Artists worldwide have and continue to put their lives on the line in order to question, expose, and provoke. Standing at the forefront of the search for truth, documentary filmmakers face both the uncertainty of artists and the threats traditionally reserved for journalists. Eddy Munyaneza is a young filmmaker from Burundi who, like the two persecuted Turkish filmmakers of Bakur, has been persecuted for his documentaries exploring the conflicts and crises that Burundi has faced. Through his work, Munyaneza exhibits unwavering strength, courage, and commitment to recording various political events in his native country despite receiving direct threats.

After releasing his first feature-length documentary Histoire d’une haine manquée in 2010, Munyaneza became one of Burundi’s most promising filmmakers. A cross between political and personal narratives, the film tells the story of how he and his Tutsi siblings were saved by their Hutu neighbors during the Burundian genocide in 1993, considered as a fratricidal war triggered by the murder of the first democratically elected Hutu president Ndadaye Melchior. Encouraging Burundians to persevere and embrace hope despite the nation’s dark history, Munyaneza reminds his audience that the genocide was not just a story of pure hatred, but also of fraternity and love between the Hutus and Tutsis who saved each other from death.

“Film is the most eloquent way to communicate and to relay a message. What can convey emotions and sentiments more than images and sound? For me, it’s film.”

Histoire won several awards from international and African festivals, such as FESTICAB (Festival International du Cinéma et de l’Audiovisuel du Burundi), the only major and internationally-known film festival in Burundi. In 2010, Munyaneza received the Prix Spécial for Human Rights at FESPACO, the Panafrican Film and Television Festival of Ouagadougou in Burkina Faso. Most notably, Munyaneza was honored by the president of Burundi, Pierre Nkurunziza, in Kirundo. At the time, the Burundian government celebrated Munyaneza’s work and included his documentary work in the curriculum of trainings hosted by the Ministry of Human Rights.

Unfortunately, Munyaneza quickly fell out of favor with the Nkurunziza Administration once his work started focusing on the president’s controversial run for a third term in April 2015. In the ensuing two-year political crisis, between 500 and 2,000 people were tortured and killed, and nearly 400,000 were forced into exile. Many of the prosecuted were activists, journalists, and students. Among them was Pierre Claver Mbonimpa, one of Burundi’s most prominent human rights activists, who was shot during an assassination attempt that was believed to be carried out by Burundi’s intelligence services. After narrowly escaping death, he was smuggled out of the country and evacuated to Europe for treatment.

Like Mbonimpa, Munyaneza demonstrated extraordinary courage and dedication in the face of the brutal crackdown on freedom of expression in Burundi. Taking his camera to the streets, Munyaneza recorded the violent unrest of the two-year crisis: Burundians clashing with armed police and citizens fleeing the country for fear of repression. President Nkurunziza’s mandate, which was seen as nothing but a third vacuum for the Burundians, became the subject of Munyaneza’s 2016 documentary and second film, Le troisième vide, or The Third Void. After releasing the film, however, he received anonymous calls threatening him with physical harm. Believing the threats were made by agents from the government’s Secret Service, he fled the country in 2016. Despite the threats to his life, Munyaneza returned to Burundi in hiding to get additional footage for Le troisième vide. In 2017, the film received the award for Best Documentary at the annual Guido Huysmans Young African Film Makers Award (YAFMA).

“All Burundians have a story to tell. Everyone has lived a day of war, hatred, love, hunger, and misery.”

In 2018, Munyaneza released his third and latest film, Lendemains incertains, or Uncertain Future, which features the fragmented and brutal stories of Burundians who have remained or fled the country during the political crisis in June 2015. Chronicling the separation from and the search for his family in Burundi and Rwanda at the time of the events, Munyaneza ultimately draws parallels between the loss of democracy and his own personal story. Since fleeing Burundi in 2016, he has been separated from his wife and three children, who currently reside in a refugee camp in Rwanda. Just as he had done for Le troisième vide, Munyaneza risked his life to get film footage by sneaking back to Burundi. In April 2018, Lendemains incertains premiered in Brussels, Belgium at the famous Palace Cinema, where it was given a standing ovation. The film was also selected at major international festivals, such as Festival de Cine Africano (FCAT) in Spain and Afrika Filmfestival in Belgium.

In the midst of one of the darkest chapters in Burundian history, Munyaneza remains a promising voice for national Burundian cinema and the next generation of filmmakers. With a large absence of resources to support film and cinema culture in Burundi, Munyaneza aspires to design programs that teach young Burundians about filmmaking, photography, and audio techniques, as well as organize more festivals like FESTICAB that focus solely on Burundian talent. Despite the slow development of cinema in Burundi, Munyaneza has faith in the new generation of Burundian artists. In an interview, he shares, “It’s true that we don’t have adequate materials nor the knowledge to rival other filmmaking cultures. But we have what is essential: passion, love, and the will to work for cinema.” Munyaneza is currently in the process of seeking asylum in Belgium, but hopes one day to return to Burundi and teach courses on cinema for budding filmmakers.

By Clarisse Taboy, July 2018. Clarisse graduated from Sarah Lawrence College with a concentration in French Language and Literature. She hopes to use her passion for literature, art, and helping others to advocate for human rights and freedom of expression.

UPDATE (10/30/18): On October 20, Eddy Munyaneza won the award for Best Documentary at the 2018 African Movie Academy Awards for his film Uncertain Future. 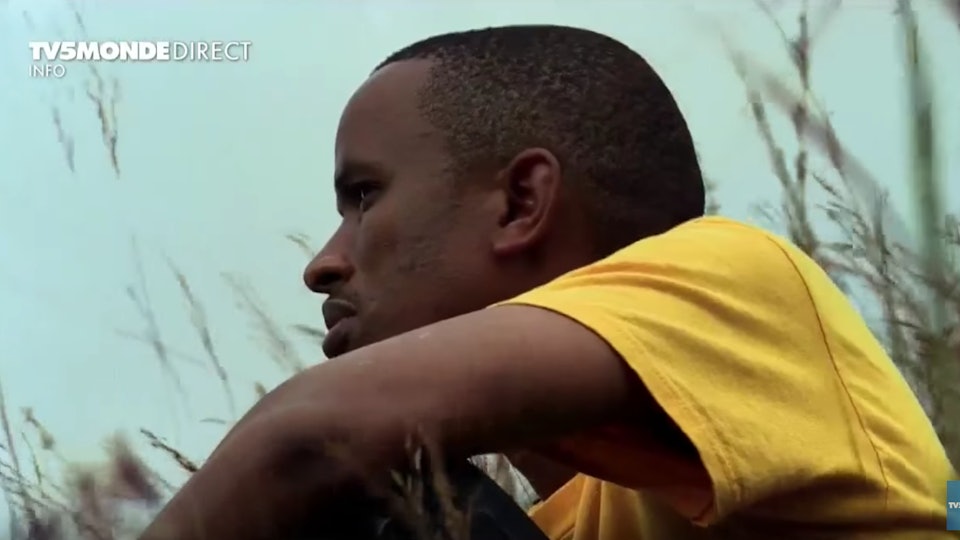 TV5Monde feature on Eddy Munyaneza and his film Lendemains Incertains
Thank you. You will receive an email confirmation.
Close