East and Horn of Africa

DefendDefenders, known as The East and Horn of Africa Human Rights Advocates Project until 2015, aims to protect and advocate for human rights defenders of all kinds within its region. Centered in Uganda, DefendDefenders also serves Burundi, Djibouti, Eritrea, Ethiopia, Kenya, Rwanda, Somalia (as well as Somaliland), Sudan, South Sudan, and Tanzania. The organization holds a network of over one hundred human rights organizations within the region, aiming to connect resources in neighboring countries and bridge gaps in knowledge and collaboration. They also represent the East and Horn of Africa region in the Pan-Africa Human Rights Defenders Network (AfricanDefenders), which consists of five organizations representing the five different regions in Africa, linking human rights defenders to the organizations that serve them through the continent.

The term “human rights defender” can be applied to any individual who fights to uphold human rights, whether they are acting on their own, or as part of an organization. DefendDefenders represents human rights defenders of all kinds, including artists, journalists, activists, and lawyers, to name only a few. For some in the East and Horn of Africa, simple advocacy is a risk to their rights, freedom, and sometimes, their lives. In a region that has experienced grave human rights abuses, programs like those in DefendDefenders network are integral to protecting the right to dissent. 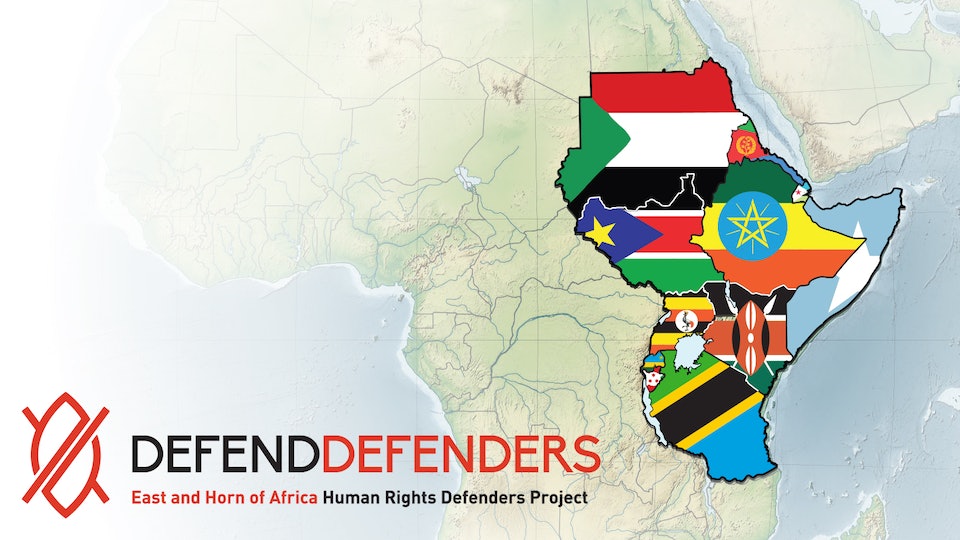 In Uganda, freedom of association, expression, and peaceful assembly have been especially threatened as of late. President Yoweri Museveni of the ruling party, National Resistance Movement, has been in power since 1986, retaining his and his party’s power through oppressive, violent, and intimidating practices - including the persecution of artists. Bobi Wine (Robert Kyagulanyi), a popular musician and opposition member of parliament, was violently arrested and taken into custody in 2018. While he was ultimately released, the arrest of such a prominent opposition figure is a disturbing precedent for freedom of expression, and freedoms of all kinds, in Uganda.

Digital freedom is also in danger in the Eastern African nation, most notably due to a recent social media tax. Under this tax, users of popular social media apps like Facebook, Twitter, and Whatsapp must pay a prohibitively expensive daily fee to use these platforms. The tax has been lauded by activists and opposition as an attack on free expression, and a means of shutting down the government criticism that often finds a home on social media. In response, President Museveni has called social media a luxury, comparing the tax to those enacted on liquor, perfume, or cigarettes.

Last year, DefendDefenders published Uganda’s Social Media Tax through the lens of network measurements, a research report which found that the government was, in fact, implementing censorship through this social media tax by tracking network interference as well as blocked or taxed sites. This research was done in collaboration with OONI (Open Observatory of Network Interference) through the DefendersTech program, which aims to facilitate strategic and secure usage of technology by human rights defenders in the East and Horn of Africa. Besides research, DefendersTech provides programs and training in digital security for human rights defenders in the region and offers insight to human rights organizations on subjects like web presence and social media. This plays into DefendDefenders’ goal of enhancing the capacity of local organizations, connecting them through their larger network and making sure they are equipped to defend human rights as effectively as possible. Through this, DefendDefenders allows organizations in their region to thrive, filling any gaps in capacity among its network.

In addition to aiding organizations, DefendDefenders has programs in place that directly serve human rights defenders through protection and security management. In their advocacy, HRDs are put at risk of intimidation, harassment, and even physical assault. Through a specialized Protection Programme, DefendDefenders is able to uniquely provide emergency assistance to human rights defenders, on a case-by-case basis. This includes emergency measures such as legal representation and assistance, but also preventative and security measures to make sure that HRDs are able to defend both their personal safety and what they believe in. In this, DefendDefenders is getting to the root of the issue, but also recognizing the immediate need faced by human rights defenders through programs like their 24-hour emergency phone line.

For over ten years, DefendDefenders has served human rights defenders, helping them recognize, assess, and respond to threats and intimidation, while also making sure that other organizations that serve them have the capacity to do so. The work they do allows for a future in the East and Horn of Africa in which human rights are guaranteed, not fought for.

By Bridget Duggan, July 2019. Bridget is currently pursuing a B.A. in Sociology with minors in English and Sustainability at George Washington University. She is an aspiring storyteller, and passionate about the pursuit of social change through the arts.

DefendDefenders Website
Thank you. You will receive an email confirmation.
Close