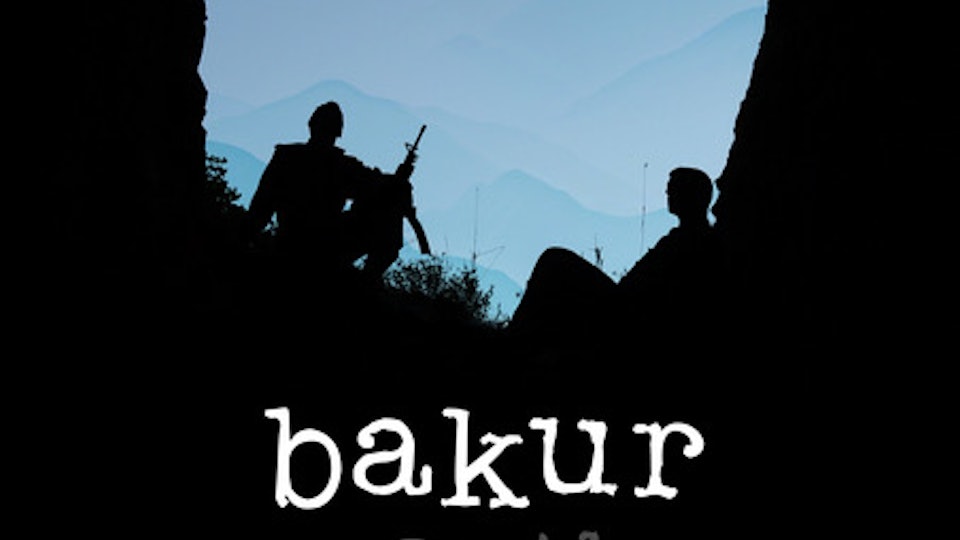 UDPATE: On July 19, 2019, documentary filmmakers Çayan Demirel and Ertuğrul Mavioğlu, directors of the 2015 documentary movie Bakur ("North"), were sentenced to four years and six months in prison for "making propaganda for a [terrorist] organization" by the Batman 2nd Assize Court. Initially sentenced to three years each, the court increased the sentences as required by Turkish law because the "propaganda" was made "through press and broadcast," according to news reports.

Bakur, which translates to “North” in English, is a documentary that provides another perspective of the 40-year armed conflict between the Turkish government and the PKK. Filmed during the peace process in 2013–2014, the film intimately explores the daily reality of guerrilla fighters residing in the mountains of northern Kurdistan––men and women who have chosen to join the armed resistance to create a new future. Filming was no easy feat. This was the first time that a professional camera had ever accessed these camps. Filming took place in the summer and fall months of 2013 in various camps in North and South Kurdistan, primarily in Dersim, Amed, and Botan. The film allows the viewer to hear the history of the PKK movement recounted first-hand and tells the personal stories of the guerrillas as we learn about their hopes and expectations for the future. This movie gives its audience the metaphorical "keys to the mountains" and invites them to view the PKK from an entirely new perspective.

The two Turkish documentary filmmakers, Çayan Demirel, an award-winning director, and Ertuğrul Mavioğlu, a veteran journalist, are currently on trial for Bakur (North). Both filmmakers have received strong backlash from the Turkish government despite the fact that the film was never screened in Turkey. Both are accused of producing “propaganda for an illegal group” and could face up to five years in prison, making this the first case in Turkey’s recent history in which a lawsuit has been filed against filmmakers.

“Any propaganda one can find in this film would be a propaganda for peace.”

The response to the documentary in Turkey could not have been more different. Hours before its premiere at the 34th International Istanbul Film Festival in May 2015, Bakur was banned from screening by the festival committee on behalf of the Ministry of Culture. According to the latter, the film lacked an official registration certificate to be able to show at the event. However, before the censorship of Bakur, several films without the certificate had screened at the festival without any problems.

The blatant act of censorship sparked protests from many filmmakers in Turkey, who withdrew their films from the festival in a show of solidarity and support for directors Demirel and Mavioğlu. Before Demirel and Mavioğlu's first hearing in court on January 18, 2018, dozens of filmmakers gathered in front of the Çağlayan Courthouse in Istanbul where the trial was held to protest the censorship. Their signs read, "Sinema Yargilanamaz! Keep Films Out of Court!"

This case is one more sign of a growing crisis for Turkish arts and culture in recent years. The Turkish government’s sprawling crackdown on its real and suspected opponents touched off by a coup attempt in July 2016, continued throughout 2017. Using emergency powers and vaguely-worded terrorism laws, the authorities had suspended or dismissed more than 110,000 people from public-sector positions and arrested more than 60,000 people by the year’s end. Extensive use of pretrial detention meant that many suspects were held behind bars for long periods without due process.

There was increasing evidence of extrajudicial “disappearances” and routine torture of political detainees. In June and July, officials arrested many leading human rights activists on terrorism charges. The Turkish-Kurdish artist, journalist, and activist Zehra Doğan was sentenced to nearly three years in prison for creating a painting that portrays the Kurdish town of Nusaybin after its destruction by Turkish security forces. Osman Kavala, perhaps Turkey’s most prominent civil society leader, was detained in October 2017 and eventually charged with attempting to overthrow the constitutional order. On June 6, 2017, Taner Kılıç, a human rights lawyer and the Chair of Amnesty International Turkey with 10 other human rights activists, was arrested. Kılıç was released on January 31, 2018, and brought back to jail the next day. The case is pending, and the defendants face potentially long prison sentences if convicted. The next hearing is in June.

Since the attempted coup, at least 1,500 civil society organizations have been summarily closed and their property confiscated. The prosecution of journalists and thinkers continues. Arrests based on messages shared via social media are common, leading to widespread self-censorship and a general chilling effect on political discourse.

However, Bakur is the first notable case in Turkey’s recent history that a heavy penalty, namely a trial with a prison sentence, has been imposed on filmmakers. Responding to the accusations, Mavioğlu stated, “While making this film, Çayan and I focused entirely on documenting the peace process. Any propaganda one can find in this film would be a propaganda for peace. Yet whenever we say 'Peace' the state tends to hear it as 'Terror' and they base their allegations on this perception. For me, this case is illegitimate and against the law.”

Ertuğrul Mavioğlu appeared before court on February 5, 2018 to give his deposition, only to hear after hours of waiting that the judge did not have the correct indictment. Çayan Demirel was scheduled to appear before court on February 8, 2018, but decided against it, given his difficult health condition after a heart attack. Demirel had already been called for deposition on December 28, 2017; this has been postponed, however, since the board of judges were on leave at the time. Both filmmakers will have to wait until May 29, 2018 to defend their case during their next rescheduled hearing.

Documentary filmmakers are storytellers of truth. Like all artists, they play a critical role in contemporary society, from promoting dialogue across borders, bearing witness to inhumanity, and stimulating innovation, to inspiring change. Given the power of their voices, many times they are unjustly targeted and threatened.

Help ARC raise awareness about this case and tweet your support for the directors of Bakur as they prepare to defend artistic freedom in Turkey. Use the button below or create your own tweet including hashtags #DefendBakur #SinemaYargılanamaz #KeepFilmsOutOfCourt and tagging @AtRiskArtists.

UPDATE: The third hearing of Çayan Demirel and Ertuğrul Mavioğlu's trial was held on February 21, 2019. The prosecution has demanded an increased punishment for the filmmakers, and the will adjourn until April 3, 2019.

UPDATE: The trial for Çayan Demirel and Ertuğrul Mavioğlu has been postponed until February 21, 2019.

UPDATE: On May 29, Çayan Demirel and Ertuğrul Mavioğlu appeared before the Batman 2nd Assize Court for trial. After the directors gave short statements, their legal representation presented the expert opinion conceived by Article 19, an organization dedicated to preserving freedom of expression through lobbying, policy work, and awareness campaigns. The Court accepted the expert opinion to evidence, and upon request, exempted Demirel and Mavioğlu from attending future hearings. The trial was then adjourned until October 23.

UDPATE: On May 2, 2019, Çayan Demirel and Ertuğrul Mavioğlu appeared in front of the Batman 2nd Assize Court expecting to be charged with disseminating propaganda in favor of a terrorist organization under Article 7/2 of Law no. 3713 on Counter-Terrorism for their documentary Bakur. However, before Demirel and Mavioğlu’s attorneys could make their final defense statements, the court noted that journalist and filmmaker Ertuğrul Mavioğlu is currently also under investigation by the Ankara Prosecutors Office. The court adjourned the hearing to July 18 in order to probe if both cases ought to be combined. The attorneys noted that this postponement puts a disproportionate strain on the defendants who have to cover travel to Batman for each hearing, and especially on Demirel who continues to suffer from the long-term effects of a heart spasm that he experienced in 2015.

By Clarisse Taboy, January 2018. Clarisse graduated from Sarah Lawrence College with a concentration on French Language and Literature. She hopes to use her passion for literature, art, and helping others to advocate for human rights and freedom of expression.

Çayan Demirel, Director
Çayan Demirel was born in Istanbul in 1977. After completing his degree at the Faculty of Economics, he started working in documentary film in the year 2000 with oral history projects. In 2006, he completed his documentary 38 about the Dersim events, and he established Surela Film Production in 2008. In 2009, he won the "Best Documentary" award for his film Prison Number 5: 1980-84 at the Antalya Golden Orange Film Festival, the Ankara Film Festival and SİYAD. His documentary entitled Dr. Şivan (2013) is about the life of Dr. Sait Kırmızıtoprak, a Kurdish intellectual who lived between 1935-1971 and who was the founder of the first leftist Kurdish guerrilla movement. Çayan Demirel's documentaries have been shown at many international film festivals, universities and NGO's. Bakur is the director's latest feature-length documentary.

Ertuğrul Mavioğlu, Director
Ertuğrul Mavioğlu was 19 years old at the time of the September 12, 1980 military coup and he spent 8 years in jail for political reasons during the period between 1980 and 1991. During his periods of freedom, he completed his degree in journalism. He worked nearly 30 years as a journalist at various newspapers and television stations. He has received two awards for investigative journalism from the Progressive Journalists Association. He is the author of an oral history trilogy about the September 12, 1980 junta, as well as a co-author with Ahmet Şık of a two-volume work about the counterinsurgents in Turkey. Mavioğlu's last book was published in 2012 and was an analysis of the media. In 2006 he was a co-director along with Sedat Yılmaz of a 26 minutes’ short documentary entitled Apoletli Adalet. Bakur is the director's first feature-length documentary.