A multi-talented writer, photographer, and filmmaker, Tajik Anisa Sabiri shows through her work the power art can have to connect audiences from around the world. While she started her career as a poet and journalist, she also worked as an art manager, lawyer, and recently as the filmmaker of an award feature film, The Crying of Tanbur, 2018.

“If one has a passion for art, and a topic that must be delivered, this artist will find a way.”

Her commitment to telling the stories of Tajikistan and to never shy away from calling out issues of corruption and censorship in her country has won her international acclaim, but also caused her to be shunned by many Tajik cultural institutions and professionals.

At age 13, Sabiri started publishing poems - which are, in a sense - philosophical attempts to realize herself in a complex world, where the system is dead and injustice is rife.

At the same time, she was working as a freelance reporter for the Central Asian news agency Asia Plus. "Already back then, I realized that I can not publish everything I want to say, and I had a lot to criticize about the system," Sabiri remembers. She became interested in the political and philosophical aspects of freedom and later went on to study law in Moscow. In the poetry of those years, Sabiri touches upon the problems of Tajik labor migration in Russia, the difficulties of being a citizen, non-observance of constitutional rights, as well as the difficult conditions faced by the intelligentsia of her generation.

After graduating and returning to Tajikistan in 2013, Sabiri decided to work in art management with both the Bactria Cultural Center and the Union of Craftsmen in Tajikistan, intensifying her creative and journalistic writing. In 2014, her first book Devanagrad was published and honored by the Writers Union of Tajikistan with the Padida Award for innovation in literature. At the 80th International PEN Congress in Bishkek, Kyrgyzstan, she gave a speech on the status of women writers in Central Asia.

In 2016, Sabiri was invited by the Tajik Academic Theatre of Opera and Ballet, named by Sadriddin Ayni in Dushanbe, to write a libretto for the first national ballet, dedicated to the 20th anniversary of the independence of Tajikistan. Within two weeks, she transformed the enormous Tajik-Iranian epos Shahname by Abulqasim Firdawsi into a libretto. At the same time, the Tajik Ministry of Culture announced the demolition of the Mayakovski drama theatre, a fate that many Soviet-era buildings in the capital have faced before. Sabiri responded with an article defending the theatre’s cultural significance and critiquing the country’s rampant corruption and bribery which she viewed as detrimental to the Tajik people. After submitting the text to news platforms, she boarded a plane for a conference in Saint Petersburg.

Afterward, she decided to attend film school in Moscow, where she studied with German filmmaker Fred Kelemen. Filmmaking was a practice Sabiri could only dream of in Tajikistan. For a female director in her country: raising funds, collecting licenses, and gathering a team appeared unachievable. Nevertheless, her home country continued to be an important theme for her films. Her short film Redemption, an interpretation of Dostoyevsky's Crime and Punishment, was shot in Tajikistan, and later premiered at the Russian festival Kinotavr. After graduating, Sabiri returned to Tajikistan and continued writing. She also worked as a tour guide and educated tourists about the country’s heritage and the Tajik Civil War, a topic rarely discussed today in Tajikistan.

In the early 1990’s the civil war killed between 35,000 and 157,000 people and displaced more than 800,000. When Sabiri told two travelers from the USA – Joseph and Smita Proto – about her film script for the story of a war reporter’s family, they set up a fundraising campaign for its production. While the fundraising campaign was a success, Sabiri still had to confront the regulations on cultural production in Tajikistan. The government-affiliated Tajik film agency rejected the shooting license application for the script three times. Sabiri eventually submitted a version excluding battle scenes, and it was accepted. After the film was shot, she was ordered to the police station and asked to turn in the original hard disk.

Based on a true story, The Crying of Tanbur tells how the son of a killed journalist attempts to take over his father’s role. The boy supports the family while helping his mother through her depression, and shielding his little sister from the fact that the father was killed. Sabiri and her team presented the film at festivals around the world, including the Brooklyn Imagine This Women’s International Film Festival, where the film received an award in the category Best Young Woman Storyteller.

“I am determined to be an artist. I can’t afford to lose my freedom to create.”

Sabiri plans to shoot another motion picture in the near future. Currently, she and her team are finishing a documentary on the disappearance of ritual music that has played for centuries at funerals in Tajikistan. However, Sabiri is not merely pursuing her individual projects, but also seeking to invigorate the film scene in Tajikistan. In 2017, she invited eight talented young people, half of them women, to develop their filmmaking skills in a residency program, which was supported by the British embassy in Tajikistan.

Sabiri’s commitment to film comes from her belief that film is a subtle yet deeply engaging way to address suppressed experiences. In addition to reconnecting the Tajik people with their cultural heritage and history, art because of its universality speaks to a global audience. Viewers worldwide have embraced The Crying of Tanbur and hope to hear more stories from Tajikistan. Despite the intimidation she faces, Sabiri cannot be silenced.

By Lena Schubert, January 2019. Lena is a Cultural Studies major and Art History minor at the Humboldt University in Berlin and studied abroad with the Bard Globalization and International Affairs Program in New York City.

The following poems are courtesy of Sabiri:

It seemed to me, that the cause of light is darkness, With mad chambers in the shower in abundance,

That the wall became more solid, Not bent over the ceiling,

and under the thicker floors, and in front of another wall,

Absorbing space, including thoughts ... It seemed to me, that someone turned off the light,

That it simply died for a while, And, that existence is not driven out of the mind -

The one, which is odd... Which prevents to become

With you, Extremely honest, in dialogue with life..

‘’..We were waiting for death, but our child born in torment

overripe pomegranate, sprinkled our roads with the blood of separation

no longer it recognize us, as the blood has already been covered

with the golden dust of autumn .. and I searched in vain for these traces ..’’

“..No more rhyme can be found to the sorrow of this world.. It dissolved in whitewash and leaked through the eye mirror.

Hey, mad Wanderer, I scream to the moth, fluttering under the amethyst lamp - why do you rush from light to light -

this lamp bites your wings just like mine but you fly towards it yourself, and I run from it..’’

In this lake, where gold is hidden, Hiding also the voiceless dumb fish..

and the gold in the world is over, and the world has ended alchemy,

and magic became a craft, which is not able to create good anymore....

in this lake we remained fish - voiceless dumb fish, hiding in vain

In this fish-infested lake until the world collapses from hunger and our brothers are starved to death,

no life left, a life in it

has clogged up, and we are corked, being a fish

which silently shout, which is silently yelling

about its worthlessness, imitating the birds…

considering, that we are birds, looking 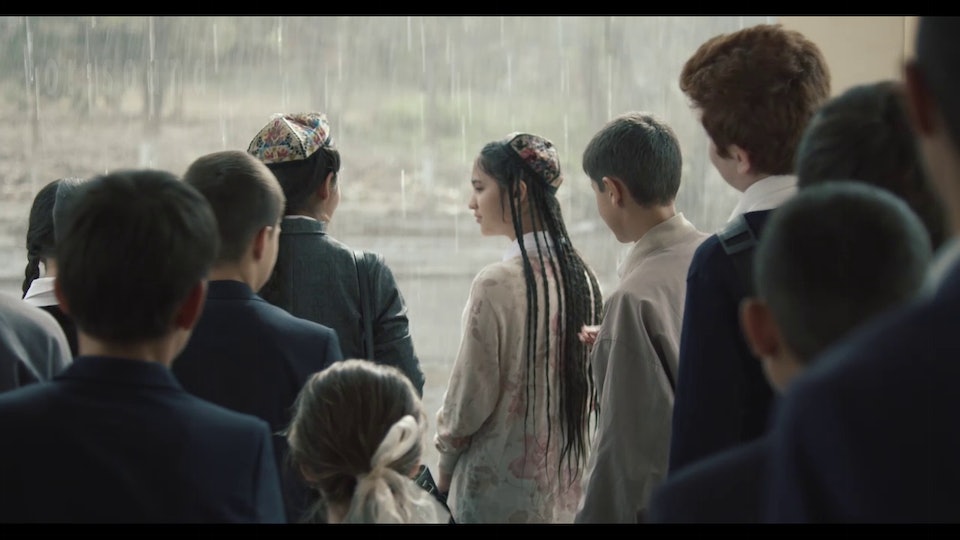 Preview of Sabiri's film, "The Crying of Tanbur", 2018.
Thank you. You will receive an email confirmation.
Close